We use anonymous cookies, only to monitor our website's performance. We collect no personal data.

NEW! Online shop now open, with a range of products available from stock.

NEW! Online shop now open, with a range of products available from stock. John 'Papa' Sneddon always had a passion for art, and in fact won the Scottish gold medal for art while still at school. When he left school joined the draftsman's office of John Brown's shipyard in Clydebank, where he also worked in the photography office. Among his many assignments, he painted one of the first paintings of HMY Britannia in 1953 during her sea trials. During this time he also started to work in the signwriting department of the yard, before being called up for National Service. We know little about his time in the Army, however we do have a photo of his work. The motto below the crest is from the Royal Artillery however we don't know where the photo was taken.

After his National Service, John found work with an advertising agency, where his work included painting advertisements in the Glasgow Underground. After a few years with the advertising agency, John took a job with a paint manufacturer as a traveling salesman, selling paint and accessories around the West of Scotland. At some point during his time as a salesman, a hotelier asked John if he knew of a signwriter who could paint the hotel's name on the side of the building. Being a signwriter, John took the job on himself, and from there he started taking more and more signwriting work, which eventually led to him leaving the sales job and working full time as 'John M. Sneddon, Signwriter'. Initially working around the West Coast, John took over the Paisley 'patch' from another signwriter who was retiring.

By this time, John had married and had family, a boy (Jim) and a girl. John was working from the garage of their house in Bishopton as well as travelling to jobs. From his early teens, Jim took a keen interest in signwriting and could often be found working with his dad in the garage at the weekends. Leaving school at 16, Jim found a job in George E. Packer & Sons (Alphabetta Signs) based in Renfrew Street, Glasgow. Packers were manufacturers of screen printed and engraved signs, and Jim learnt a huge amount about other types of signmaking apart from traditional writing. After a couple of years in Packers, the father and son team decided to form a business together, and in 1976 Sneddon Signs was formed. Despite his time at Packers, Jim spent most of his time signwriting, going on to become a Master Signwriter, and with 2 signwriters working together, Sneddon Signs quickly outgrew the garage at the house. The first workshop was an old Nissen hut located at 88 Greenhill Road, Paisley, with some space at the front of the workshop to work on larger vehicles.

After a couple of years, spray painting was starting to become more common and Jim first picked up a spray gun because it was quicker than hand brushing background colour on to sign panels. It soon became apparent that fleet operators and managers wanted a 'one stop shop' where vehicles could be resprayed, as well as lettered. The Nissen hut at Greenhill Road was too small for this kind of work, and in the late 1970's the company moved to MacKean Street. The first workshop in MacKean street was next door to our current premises, in what is now the Paisley VW Centre. At the very beginning a lot of work was needed to bring the yard up to a usable standard, including building and repairing some of the roof structure and office space. Around this time, Sneddon Signs employed our first apprentice sign writer, followed shortly by an apprentice spray painter.

Over the next few years the premises underwent numerous changes and developments, to keep up with the expansion of business and as road vehicles got bigger. Unfortunately the yard had it's limitations and in the early 1980's the opportunity arose to buy part of the old timber yard next door. Jim seized the opportunity to purchase a large yard, with plenty of space for a custom built workshop, designed exactly to the company's needs and with space for expansion as required. After many meetings with architects and engineers a final design was approved and work started on the new premises in 1988.

The new building includes 2 commercial vehicle spray booths, a large prep area and a lettering workshop. As well as this, a sign manufacturing workshop was built above the office and administration space, kitted out with the latest in sign making technology. Work on the building was completed in 1989 and the company moved into our new workshop, where we have remained for over 30 years. Over the years, we have constantly evolved our equipment, processes, and people, striving to utilise the latest technology throughout the business. This includes state of the art spray booth equipment and cutting edge digital printing and cutting equipment in the sign shop. Sneddon Signs continues to look to the future, and in 2016 Jim's son, Sandy, joined the family business as an apprentice signmaker and vehicle wrapper. Alongside our incredible staff team (including our first apprentice sprayer, still with us after more than 40 years) Jim continues to lead the business, constantly investing and evolving to ensure Sneddon Signs is always at the forefront of our industry. 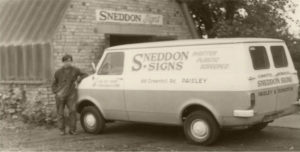 Jim aged around 18, standing outside our first Paisley workshop at 88 Greenhill Road, Paisley. The Bedford CF had a light blue/white 2-tone colour scheme.

One of our early logos, first used in the early 80's 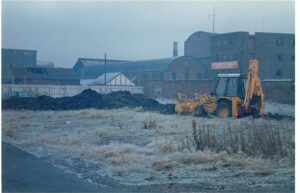 "Breaking ground" on the new building, a monumental moment! 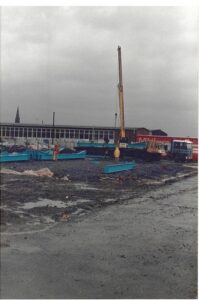 The first steelwork of our current premises being prepared for lifting in to place. In the background you can see a Malcolms lorry dropping off the next load of steelwork 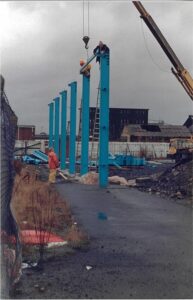 The first steelwork erected and beams being lifted into place - H&S rules were a bit different compared with today! 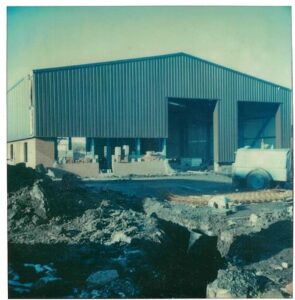 Works progressing well, this picture would have been taken early in 1989 as work started to move to the inside of the building 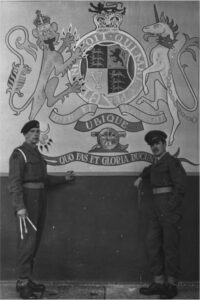 John in his Army days, the motto in this photo belongs to the Royal Artillery